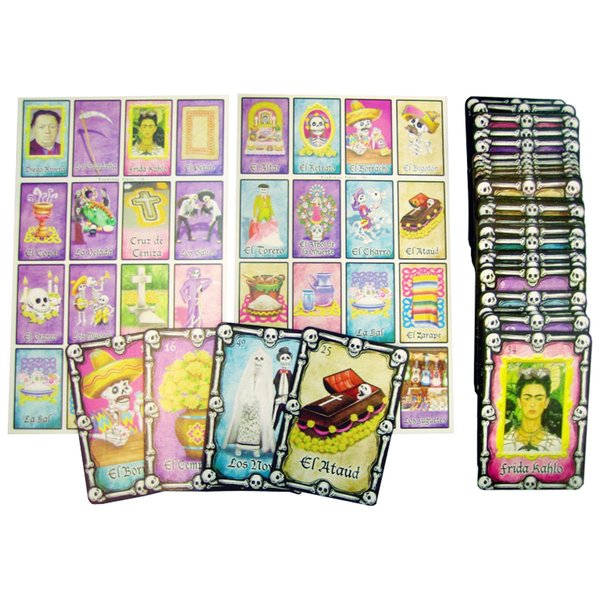 The Loteria is the most popular game in Mexico and similar to the Bingo. Each card of this nice Day of the dead Loteria set introduces a different item regarding the traditions and icons of the Dia de los Muertos, a number and the name of the card in spanish. The cards can also be used as an altar decoration but in the first instance it is a big fun game for the young and young at heart ones.

The game consists of 10 large playing cards and a deck of 54 "calling" cards. Instructions for playing:

First you choose on of the person to be the master of the cards. He / she will draw the cards for the players and announce them. In Mexico this is done with a little song or ryhme but you do not have to do it this way. Saying the name or the number of the card is the essencial. All players have minimum one of the tablas in front of them. Each tabla consists of a different mix of the 54 graphics. When the master of the cards has announced one card, each player has to check, if the announed one is on his tabla. If yes - great - you have to mark it with a little item. In Mexico beans, crown caps or peanut are used but you can choose whatever your imagination is tellling you.

The player who first has a horizontal, vertical or diagonal line of marked items on his / her tabla is the winner of the round and has to scream "Hasta la Muerte" or simply "Bingo"!