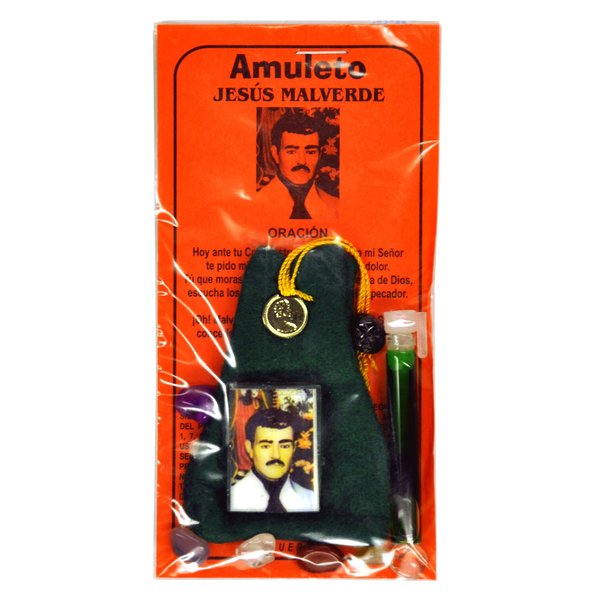 Jesus Malverde is one of the most famous Mexican folk saints. According to the legend, Malverde was a reckless robber who took it from the rich and gave it to the poor - a mexican Robin Hood. The legendary bandit enjoys a certain cult status across all layers of the population, comparable to the Santa Muerte cult. Like the saint of the death, he too is not officially recognized by the Roman Catholic Church and frowned upon as pagan.

Although Malverde is nowadays almost exclusively confined to its role as patron saint of drug cartels, he means much more to the Mexicans: he’s both an icon of hegemonic and underground culture and a symbol of patriarchal oppression. He also stands for the feeling of postcolonial abandonment and the criminal environment, that the so-called border people, who live at the cultural border between Mexico and the USA, have to face on a daily basis. For most Mexicans, the simultaneous belief in Jesús Malverde and the Catholic Church is no a contradiction at all. And so, a candle is being lit for the generous white-robed bandit after the Sunday service, too.

How to use: After putting the stones in the bag and sprinkling them with the magical Malverde Odeur, say the prayer on the upper part of the leaflet. You can do that either on the first day of the new year or, if starting during the current year, on a daily basis for a full month. In the following months, read the Psalm either on the 1st, 7th, 9th or 21st of each month, and make sure to always carry the - now activated - Malverde charm with you.